Posted on September 19, 2011 by mysuperheroblog

We wanted to thank a few friends who made this possible-

Tazy Phyllipz (skaparade.com) OC Ska legend, DJ, MC, ska historian – for having the vision of a reunion show and making it happen.

Jon Halprin (glasshouse.us) Long time friend, owner of Vegas Records, and promoter at the glasshouse – for believing in us and allowing the show to the held at the Glasshouse.

Timmy Bivens- for being a pro on the drums and playing flawlessly! Not only did we make a new friend, we now know a drummer that can hang for any future MSh ideas…

To GOGO13, The Skank Agents, and Warsaw Poland Bros for rocking with us!

Munki and his crew for the video work! (can’t wait to see it)

to all of our friends and family who drove out, flew in from all over to be with us that night. So much love and support from you all- HUGE THANKS!!

Here is a great review we received from Highwire Daze. Thanks to JD and Ken for rocking this music magazine for 20 years!

(Review and Photos by Kenneth Morton)

The Ska Parade has always presented the most exciting events in the genre, including being host to some interesting reunion shows. A long time project of Tazy Phyllips, who exudes a refreshingly genuine passion for the genre, The Ska Parade has been going on for some 20 years now. Tazy definitely made for a wonderful master of ceremonies for the evening, introducing all of the bands and giving the audience interesting back-stories in the process.

There were many notable ska bands who have called Orange County their home. Thanks to Tazy, one such entity, My Superhero, was doing a their first show since 2003! My Superhero were around nearly a decade, performing two tours of duty at the famed Vans Warped Tour.  The band also went on endless road trips supporting famous bands such as Reel Big Fish, The Aquabats, and Fenix TX.

Although My Superhero never employed a horn section, this ska band was definitely noted for the rambunctious accordion playing of Mike Berault. Tazy would contact Mike first about doing a My Superhero reunion show, and then was instructed to contact the others within the membership. Amazingly, all were willing to do the reunion show, except for drummer Chris Clawson, who was unavailable to participate. Tim Bivens was recruited via a recommendation by another former My Superhero member. Already knowing the songs since Tim was a long time fan who went to My Superhero shows when he was all of 12; the reunion lineup was now complete. Two months of rehearsals commenced, and My Superhero performed to a near packed house at The Glasshouse in Pomona on a Saturday night.

The memories of good times and groovin’ tunes kicked in right away when My Superhero launched into their first song One More Day from their classic Solid State 14 release. In addition to their own original favorites, there were a few terrific covers within the set as well. Big City by Operation Ivy was given a grand heroic treatment, and Groovy Kind Of Love by Phil Collins was a crowd favorite as well.

The band was clearly not fond of their Station One release, and performed a single track from the album – Best Days sounded absolutely terrific though, and should have been a big hit for the band.

An amusing part of the show arrived when the song Coley and Steve was introduced from the debut SKAboard Music release – where Mike Berault advised the crowd to never write a song about a relationship with an ex – as you are doomed to sing and relive it over and over again if people like it. And it definitely was a crowd favorite at the Glasshouse!

Another standout was towards the end of the set, when My Superhero performed the super infectious rendition of the Camper Van Beethoven song Take The Skinheads Bowling. A recorded version of this song is featured on The Ska Parade: Running Naked Thru The Cornfield compilation.

So many memories were brought back to ultra vivid life, and My Superhero was as tight and entertaining as ever. Grocers Pride, Going Somewhere, Leaving Soon, Long Gone – the memorable tunes just kept on coming at you!

Brian Gilmore is a charismatic front man, and his voice and guitar playing are an energetic and lively as ever. Mike Berault remains a rambunctious character to this day, also performing smooth lead vocals as well as the famous accordion solos and keyboards interludes. The harmonies the two vocals leads supplied were dazzling and inspired. Huey Huynh on guitar and Dan Park bass delivered their parts with flair and conviction while newest member of the My Superhero club Tim Bivens fit right in with his wonderfully dynamic playing.

Will there be any addition My Superhero performances? Only time will tell, but judging by the crowd in attendance who cheered and danced to each and every song, the band should definitely consider their options. A truly magical night in Pomona!

Special thanks to Tazy Phyllips of The Ska Parade for arranging the reunion! My Superhero has truly been missed and remains one of the top bands in the 3rd wave of OC ska!

To read the My Superhero highwire daze interview click here

New My Superhero interviews are online

Posted on September 16, 2011 by mysuperheroblog

You can read a couple interviews we did here:

The big show is tomorrow! Make sure you get there early- doors are at 6pm and MSh goes on around 930pm. The show is being filmed so go crazy if you see a camera!

My Superhero photo and news before the big reunion show

Posted on September 13, 2011 by mysuperheroblog

If things weren’t already hectic enough- members of My Superhero were asked to perform a super-secret couple of songs for their long time friend/manager/merch guy/booking agent/record label intern Sam Uisprapassorn. We go way back with Sam and were honored to be part of the festivities. Same dedicated many years to MSh and we always considered him to be a member of the band. It was a good test run to what a live show might be like. Mike didn’t have his accordion so he looked a little out of sorts but the rest of us did well. It was also a great pressure test for Tim Bivens on the drums! Congrats to Sam & Cara!

I am also proud to announce that My Superhero is now officially recorded on internet history. Yes, you can now find your local superhero’s on wikipedia! Took a little bit of research but we are there.

The show is now 4 days away. We have the final rehearsals scheduled for tonight, Thursday, and Friday. It’s been a blast to reconnect with the guys, and re-learn all of these songs. We will be playing a one hour long set with songs from SKAteboard Music, Solid State 14, and Station One. The other bands are worth seeing so please get there early- doors open at 6pm! Get tickets here

Check out the other bands: 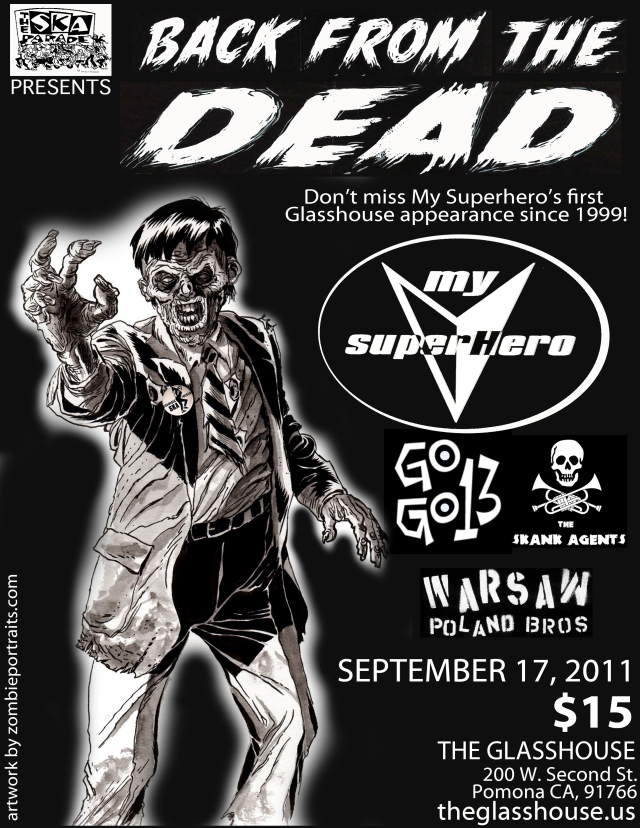 Special shout out to Rob Sacchetto @ www.zombieportraits.com  for the awesome zombie art! Also- back in the day, we had a pretty solid street team around the USA. We are looking for some online volunteers to help us spread the word about the reunion show. If you would like to help out- email us at mysuperheroband@gmail.com

My Superhero finally got together for their first “plugged in” rehearsal. Ears were ringing like the old days but we actually sounded much better than I expected! Tim B. made his drumming debut and impressed everyone. This guy knows these songs as well as we do- maybe even better. We will keep shaking off the rust and working hard to establish a 60 minute set. We need some old song ideas- dig deep! Leave a comment or 2.

It is official, The pre-sale for the MSH Show begins Friday 7/22/11 at 12:pm!  The line up is confirmed and includes of course, My Superhero, GoGo13, Warsaw, and The Skank Agents.  We are Honored to play with such a great line up!  Get your tickets on Friday at noon people!

Our original drummer Chris Clawson unfortunately declined when he was asked to play the show. Next guy on the list was Chris Bivens. Chris played with us on the Edna’s Goldfish/Gadjits winter tour when Clawson quit the band back in 1999. Chris was also unavailable to play the reunion show, but he had a great backup plan for us. It turns out his little brother also plays the drums, actually owns our CDs and knows all of our songs. Amazing.

Tim Bivens will be taking on the drums for the show.

A little about Tim B
-27 Y.O.
-born & raised in Whittier CA.
-Playing drums since I was 10 years old.
-Grew up influenced by whatever my brother was listening to at the time, 2nd and 3rd wave ska and rock. (Specials, Selecter, Madness, Bad Manners, Aquabats, RBF, MSH, Slapstick, 311, MM Bosstones, Pocket Lent, 2 skinnee J’s) After High School, I got into more Psychedelic rock (Pink Floyd, The Mars Volta) but still stayed close to my Ska roots, attending hundreds of ska shows throughout the years.
-Influenced by Chad Sexton, Jon Theodore, Chad Smith, Andrew Gonzalez, and if you can believe it… Chris Clawson.
-Went to my first concert when I was 12 to see MSH, RBF, Save Ferris, and Teen Heroes. I was blown away!
-Throughout the years I attended dozens of superhero shows.. Pretty much any one i could beg my brother to take me to. Grew up a huge fan of the band and now my dream has finally come true.. Seriously! All these years of drumming and sweating my ass off, is paying off!
-I now live in uptown whittier with my girlfriend Christina.
-I have played for such local bands as: A Groove Legacy, Manic Circuit, Brass Brain, Shogo, Love and Silver Apples, and The Brodels.
-Not much to me… I play drums, Hockey, and I love to SKAteboard.
Posted in Uncategorized | Tagged Chris Clawson, Drummer, My Superhero | 1 Comment

Monday, July 18th- we got all the old guys (minus Clawson) back together to see how rusty we really were… After some amazing carne asada (cooked up by our long time friend and previous manager- Sam) some New Castle Brown Ale, and countless old tales,  we broke out the guitars and started to figure out songs that haven’t been played since 1999. It was a  moment all of us never dreamed would happen again. It wasn’t pretty by any means, but it’s the first step and it can only get better from here… 2 more months to get it right! -Brian